No Doubt about the Identity of William Shakespeare?

No Doubt about the Identity of William Shakespeare?

The book the Shakespeare Birthplace Trust doesn’t want you to read:

Exposing an Industry in Denial

Edited by John M. Shahan and Alexander Waugh
For the Shakespeare Authorship Coalition

Now available in paperback at Amazon.com in the U.S., U.K., Canada, Europe, and at bookstores worldwide.

To read a free sample chapter, download this pdf file of Chapter 7, entitled Keeping Shakespeare Out of Italy, by Alexander Waugh.

“Authorities tell us there is no doubt that Shakespeare wrote Shakespeare. Should we trust them? This book comes at a critical time, with defenders of orthodoxy deceiving the public about how weak their case really is. Their vulnerability leads them to slander the 'heretics,' comparing authorship doubters to Holocaust deniers and creationists. It is time to replace the ad hominem attacks with a serious re-examination of the evidence. This book does just that.”

General Introduction and Challenge to the Shakespeare Birthplace Trust

Twenty-one Good Reasons to Doubt that Shakspere was “Shakespeare”

Part I: Shakespeare Beyond Doubt?

Introduction to Part I: Overview of reasons to doubt — John M. Shahan

A. Who was Shakspere of Stratford?

1. The Man Who Was Never Shakespeare — A. J. Pointon, Ph.D.
2. Shakspere’s Six Accepted Signatures: A comparison — Frank Davis, M.D.
3. The Missing Literary Paper Trail — from the landmark book by Diana Price
4. Shakspere’s Will: Missing the Mind of Shakespeare — Bonner Miller Cutting
5. Shakspere in Stratford and London: Ten Eyewitnesses — Ramon Jiménez
6. The Rest is Silence: The absence of tributes to the author — A. J. Pointon, Ph.D.

7. Keeping Shakespeare Out of Italy — Alexander Waugh
8. Could Shakespeare Think Like a Lawyer? — Thomas Regnier, J.D., LL.M.
9. How did Shakespeare Learn the Art of Medicine? — Earl Showerman, M.D.

Part II: Exposing an Industry in Denial: The Coalition responds to the Shakespeare Birthplace Trust’s “60 Minutes With Shakespeare”

John M. Shahan is founder and Chairman of the Shakespeare Authorship Coalition and principal author of the Declaration of Reasonable Doubt About the Identity of William Shakespeare. He is an independent scholar with degrees in Psychology and Public Health, both from U.C.L.A. His main areas of interest in the authorship controversy are strategic planning, advocacy, paradigm shifts, and the nature of creativity and genius. He has authored or co-authored four articles on flaws in stylometric research on Shakespeare claimants.

Alexander Waugh is General Editor of the 42-Volume scholarly edition of Complete Works of Evelyn Waugh for Oxford University Press. He is a book reviewer and author of several critically acclaimed works including Time (1999), God (2002), Fathers and Sons (2004) and The House of Wittgenstein (2008). He has presented documentaries on BBC television, was editor and founder of the award winning Travelman Short Story series and composed the music for the stage comedy Bon Voyage! which won the 12th Vivian Ellis Award for Best New Musical. 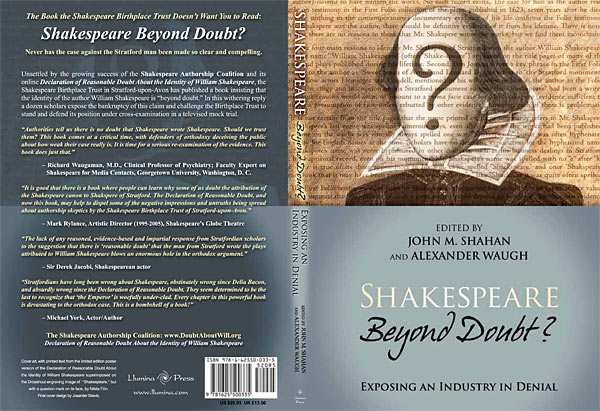